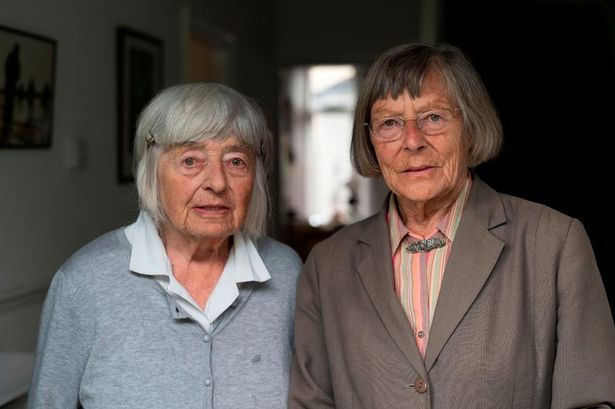 Pat and Jean Owtram were not permitted to share their secret missions with one another. (Image: PHILIP COBURN)

Two brave Lancashire sisters have shared their amazing story of finding out they were both top-secret code-breakers during World War II – but weren’t allowed to tell each other.

Patricia and Jean Owtram, who were born in Dolphinholme, shared their remarkable experience with BBC Morning Live hosts Gethin Jones and Kimberly Walsh this week (November 11).

As a young woman during the dark days of World War II, Patricia was enlisted into the Women’s Royal Navy Service (WRNS), the female branch of the UK Royal Navy.

The WRNS, or popularly referred to as the Wrens, was first formed in 1917 during WWI. It later revived at the start of the Second World War in 1939 and remained active until the integration with the Royal Navy in 1993.

“I was really very lucky,” Patricia disclosed. “Because we lived with our grandfather in the country, and he had an Austrian cook and housemaid, and when they arrived they didn’t speak much English and I spent a lot of time with Mrs Getzel in the evenings, talking more and more in German.

“So, when I joined the Wrens, I could put down flowing conversational German as one of the things I could do, not knowing how much they were looking for girls of around 18 who did know German.

“That made all the difference to my war experience.”

Jean followed in Patricia’s footsteps, also later joining the war effort to work in both Cairo, Egypt and across Italy.

Jean revealed that it was her crossword skills that bagged her the position of a Code Encipher Officer. She said: “It was during my interviews and there was pause and they said, ‘Can you do crosswords?’

Both sisters were forced to sign the Official Secrets Act, which made it a criminal offence for military or government employees to disclose certain types of information that might be considered “damaging” to another soul.

“There was dire penalties if you break it such as death,” Patricia explained. “So, you are rather careful not to talk to your family or friends, or anyone else.

“With Jean, it was years after the war that I felt I could say, ‘What were you actually doing in Italy, Jean?'”

During her years of service, Patricia was responsible for supplying codes to Bletchley Park for Enigma, the cipher device developed to protect military communication during the wars.

“We had small secret listening stations down the East coast and South coast,” she revealed. “They were staffed by German-speaking members of the Women’s Royal Naval Service, like me, and if we got an operational message, we would pass it to the nearest naval intelligence centre.

“If it was an Enigma code, that had to go straight to Bletchley Park.”

Patricia, who now lives in London., also revealed that during her time as a code-breaker, she learned how to use an official guard’s machine gun.

She laughed: “Well, it just one station which was near Dover and that was the one where did have a guard of military police, and we noticed they had rather nice, light machine guns – Sten guns.

“We thought, well, as they were there in case of a German raid, some of us would rather like to help defend our station!

“They were very good, they let us practice with our Sten guns, shooting at little targets, so I think possibly I’m the only old lady in Chiswick who does know how to use a Sten gun!”

Patricia and Jean’s father was detained in a prisoner of war camp during WWII.

Jean said: “We didn’t know much because he could send us messages written by the people who were imprisoning him there. He could only say things like, ‘I am well’ or ‘I am not well’.

“It took a long time before we got these messages, but our mother kept the family together and kept us going.”

The Owtram sisters have co-authored a novel Codebreaking Sisters: Our Secret War, which reveals all about their secret wartime experiences.

Speaking about the important of Armistice Day, Patricia said: “I couldn’t feel more strongly than I do that we should remember the ones who gave their lives, or who did so much to win the war which means we now live in a peaceful, democratic country.

“I’m old enough to know what it might have been if they hadn’t been fighting for us.”