#OnThisDay in 1918, Wren Josephine Carr from County Cork was the first Wren to lose her life in active service when the RMS Leinster was torpedoed by a German U-boat.
Having joined the WRNS in Ireland she, and two other Wrens, were travelling aboard RMS Leinster between Kingstown (now Dun Laoghaire) and Holyhead to take up duties in England. Just before 10.00am RMS Leinster was hit by a torpedo fired by the German submarine UB-123 – the ship attempted to turn back to Kingstown but was hit by a second torpedo and sank shortly afterwards. Over 500 people died in the sinking and Josephine’s body was not recovered.
She is commemorated on the Plymouth Naval Memorial. (Photograph of Josephine courtesy IWM(WWC N3-1))
#womenatwar #NavyWomen 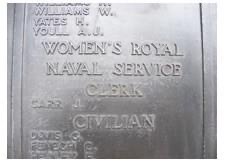